In June Theology on Tap continues its tradition of a summertime Gospel and Pop-Culture series.  This time we’re in for “The Gospel According to Harry Potter: Truth, Revenge, & Christ at Hogwarts” by the Rev’d Danielle Elizabeth Tumminio. 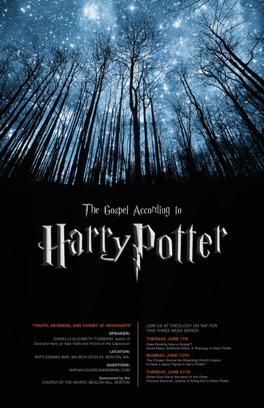 Danielle gained notoriety as the instructor of the “Christian Theology and Harry Potter” seminar at Yale University, which was profiled on CNN.com.  Her book based on the class, God and Harry at Yale: Faith and Fiction in the Classroom, was published in 2010.

She has written essays on the relationship between theology and the Harry Potter series and has delivered talks on the topic at the Portus and Infinitus Symposiums.  Danielle also served as chair of the Harry Potter and Religion panel at the American Academy of Religion’s 2008 Annual Meeting.  She is an ordained priest in the Episcopal Church and is completing a PhD. at Boston University in practical theology with a focus on theological understandings of trauma and reconciliation.

Prior to attending BU, Danielle completed three degrees at Yale University: an undergraduate degree in English and a Master of Divinity and Master of Sacred Theology from the Divinity School.  She holds certificates from Berkeley Divinity School and the Institute of Sacred Music at Yale and studied at the University of St. Andrews in Scotland and the Rothberg International School at Hebrew University in Jerusalem.

Danielle’s three talks will be held at the Rattlesnake Bar at 382 Boylston St. across from the Arlington T station on the following days from 7:00 – 9:30 PM:

The Chosen One as the Wizarding World’s Savior:  Is there a Jesus-Figure in Harry Potter?
Monday, June 13

Either Must Die at the Hand of the Other: Virtuous Duplicity, Justice, & Killing Evil in Harry Potter
Tuesday, June 21