Our next series is “I Bet You’re A Heretic: Orthodoxy, Heresy, & The Theological Imagination.”

Do you believe Jesus maintains His physical body after the Ascension? Is God one or three or three in one but operating as one while still being three? Is Christ’s Divine nature separate from his human one? Are we all schismatic? Well for the answer to these questions and more, join us at the Rattlesnake Bar, 384 Boylston St at 7pm for the first session of this exciting series! 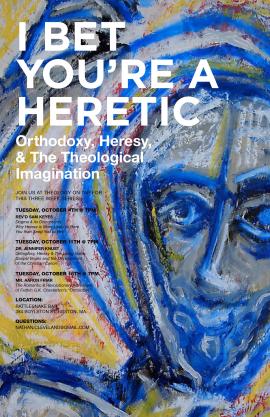 “Dogma & Its Discontents: Why Heresy is more likely to Bore You than Send You to Hell”
October 4, 2011

Fr. Sam Keyes, a close friend of the Advent, is currently working on his Ph.D. at Boston College in Medieval Theology.  Fr. Keyes completed his M.Div. at Duke Divinity and currently resides in Salem with his wife Gretchen. He is an avid reader, thinker, and aficionado of fine cooking and martinis. In his talk, Fr. Keyes will seek to explore the various ideas that illuminated the debates of the early Christian centuries and how we continue to interact with them today.

“Orthodoxy, Heresy and the Living Voice: Gospel Books and the Development of the Christian Canon”
Oct. 11, 2011

As Dan Brown would have it, the Bible as we know it today can be credited to Constantine, who excluded the best Gospels and preserved those that served his imperial (and pagan) ambitions (The DaVinci Code, p. 251-3). Such tales might make good fiction, but they do little justice to the complex process that led to the development of the Christian Bible, a collection of books that remains unstable to this very day. Yes, a number of Gospels were omitted from what would become the New Testament, but the interplay between the development of orthodoxies, the identification of heresies and the authorization of certain books was a long historical process with few clear winners and losers. In fact, surviving late antique and early medieval Christian manuscripts, including those copied after the reign of Constantine, rarely (if ever) conform to contemporary expectations of what a Bible should look like. In this talk, Dr. Knust will explore the surprisingly open attitude of Christians toward sacred books, even among those who defended the canonical Gospels and the apostolic letters as the only valid sources for Christian reflection.

Jennifer Wright Knust is Associate Professor of New Testament and Christian Origins at Boston University. Author or editor of three books and several articles, including Unprotected Texts: The Bible’s Surprising Contradictions about Sex and Desire (HarperOne 2011) and Ancient Mediterranean Sacrifice (with Zsuszanna Varhélyi, Oxford 2011), she studies ancient gender, the transmission of biblical texts and the impact of lived religion on Christian sacred scriptures.

People have fallen into a foolish habit of speaking of orthodoxy as something heavy, humdrum and safe. There never was anything so perilous or so exciting as Orthodoxy. – G.K. Chesterton

In this final lecture in the series on Heresy and Orthodoxy for Theology on Tap at the Rattlesnake Pub on Tuesday, October 18, 2011, 7:30pm, Aaron Friar along with classic essayist Gilbert Keith Chesterton will challenge the standard images associated with the notion of orthodoxy.  Focused specifically on Chesterton’s book titled Orthodoxy, Friar’s lecture will cover such paradoxes as:

Aaron W. Friar is one semester away from finishing a Master of Divinity degree at Holy Cross Greek Orthodox School of Theology in Brookline, MA.  He serves presently as a parish administrator at Trinity Episcopal Church in Newton Centre and previously taught English, History, and Latin for over a decade at a private Orthodox Christian elementary school in Boston.  He resides with his family of five just a short walk from his home parish of Holy Resurrection Orthodox Church in Allston, MA where he serves as a sub- deacon.  Aaron converted to the Orthodox Church in 1994 due in part to his reading of Chesterton’s Orthodoxy and looks forward to the day when the Roman Catholic Church will beatify St. Gilbert… unless by some mysterious coup d’état, Aaron can convince the Orthodox Church to canonize him first.

One thought on ““Orthodoxy, Heresy and the Theological Imagination” Series”