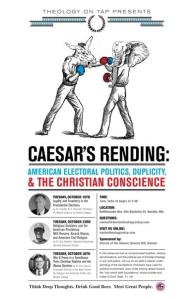 Politics sometimes divides Christians, and at times has even torn the Church along the seams of political ideologies.  Yet the Church’s worldview and its political ramifications are sewn together by different threads – the authority of scripture, tradition and reason.  Is it even appropriate though to begin with Christian premises to make public policy decisions?  Or should faith having nothing to do with politics?  In this series we look at compromised loyalties, divisive denominations, and the political use of Christian theology in war and peace.  Join us as we seek a clearer understanding of the foundations Christians have used for political involvement, even while looking ahead toward the “city which hath foundations, whose builder and maker is God” (Heb. 11: 10). 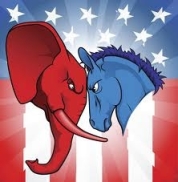 “Loyalty and Treachery in the Presidential Elections” 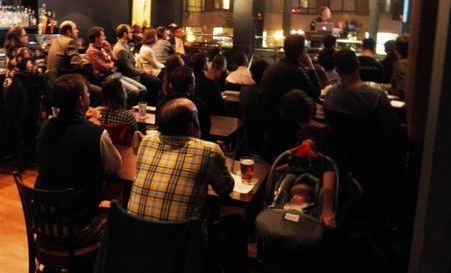 With Election Day approaching quickly, Dr. Sherratt intends to address the polarized polity, how it came to be that way, the obstacles to bipartisanship, and the occasional inappropriateness of insisting on a bipartisan approach. Along the way, he will discuss the irony of each party’s standard-bearer being a centrist rather than an ideologue.  Dr. Sherratt will conclude by asking how the pursuit of self-interest reflected in polarized politics this election season is challenged by a biblical view of power—the Power made Perfect in Weakness. Must a Christian view of power be confined to criticism; or does it lend itself to implementation in this corner of the fallen world?

Dr. Sherratt is a Professor of Political Science at Gordon College where he teaches American politics, constitutional law and Christian political thought. He received his B.A. and M.A. from Oxford University and his Ph.D. from the University of Kentucky. He is the author, with Ronald P. Mahurin, of Saints as Citizens: A Guide to Public Responsibilities for Christians (Baker, 1995). Besides chapters in two books, his work has appeared in The Christian Scholar’s Review, Catholic Social Science Review and The Review of Faith and International Affairs, The Journal of Law and Religion, The Journal of Church and State, and The Evangelical Review of Society and Politics (UK). He is a regular contributor to Capital Commentary, the online journal of the Center for Public Justice (www.cpjustice.org ) based in Washington, D.C.  A cradle Anglican, he and Christine have four children and live in Rowley, MA.